Illinois Regional Training Center
We hope everyone had a great Thanksgiving

Northern Illinois is next on the agenda. We plan on making continued statements throughout the season, and are ready to get another Friday night.

We had a nice win last time out against Missouri. Our guys fought hard for every point and finished every period either scoring or building momentum in some way going into the next.

There will be a pre-dual social at Huff for those coming this Friday, December 6th to the Northern Illinois dual. We will have a social starting 1 hour before every home dual. Each one will be at Huff Hall except for our last dual against Fresno State. I’m so excited about this one! It will be in the State Farm Center during the IHSA state tournament. It will be the HS quarter-finals in the morning, Illinois vs Fresno State immediately after, followed by the HS semi-finals.

Most importantly, the Illinois wrestlers spent 3 hours delivering Turkeys to the less fortunate in Champaign. Our boys helped over 400 families! Their attitudes made it all that more special. They did it with smiles and nothing but gratitude.

Stay in touch! Come by for a practice!
We want to wish you luck starting the season as most are involved in one way or another with a wrestling team or individual.


We started Nov 2 at the Michigan State Open. True freshman Trey Sizemore (Ohio State Champ) and Luke Luffman (3x Illinois State Champ) won the freshman division, and true freshman Dj Shannon (3x Missouri State Champ) took 2nd in the open division. Travis Piotrowski took 3rd in the open division, with his only loss in double OT to Micky Phillipi of Pitt, who was the only guy to beat Daton Fix last season before Fix’s only other loss in the NCAA finals. Red shirting Travis to gain some size was talked about this summer and fall, but after the way he competed collectively we knew he was ready to be in the hunt to All-American at 33 this year. The Braunagel twins both went 5-1 before having to stop due to the 6 match per day limit. Some asked what happened with them because following the brackets on track could mislead you to think they lost again. Both need to tweak a few small things and they’ll both get those wins back if they wrestle them again.


Sunday we split matches 5-5 with a very solid and underrated Army team. Dylan Duncan and Mikey Carr were both out, and the bonus points we gave up in those matches was the difference. Dylan and Mikey would have both been favored going in. Luke Luffman is wrestling this year and went 2-0 on Sunday against both Army and Tennessee Chattanooga. We beat UTC the following dual 22-10. Travis Piotrowski, Danny Braunagel, and Luke Luffman all went 2-0 on the day.


We hit what felt like Chicago rush hour traffic on steroids in the mountains outside of Chattanooga. It turned a 7 hour trip into nearly spending half a day on the bus. We left UTC at 5pm and pulled back into champaign at 3 in the morning.


Next up is Missouri this Thursday night. Dylan Duncan is expected back at 41 but unfortunately Mikey Carr will still be out.


If anyone is in the financial field, Emery Parker is interested in picking your brain and help with future employment. Emery has a Masters in finance from U of Illinois. Please contact any of the coaches. 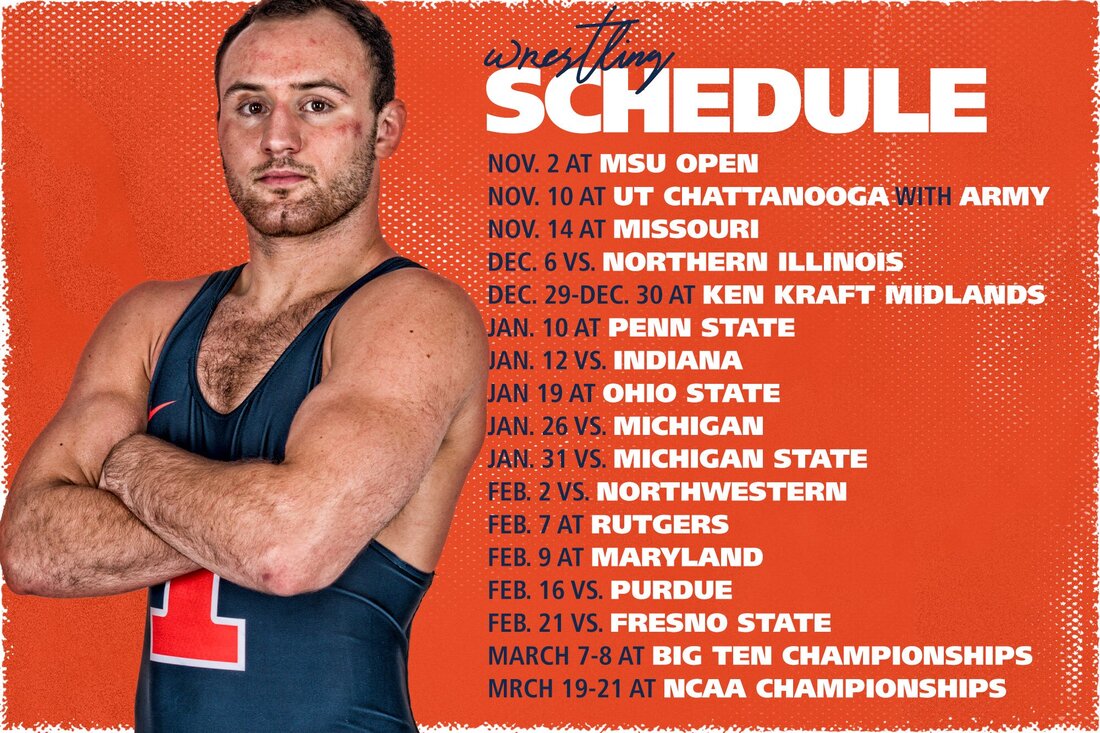 Guys, even though we haven’t competed it’s time to get B10 and NCAA tickets. Follow these links to get in the Illinois section and also to see our 2019-20 wrestling schedule. We need your guys support. What’s better than relaxing in the stands, maybe storing a drink or 2 in your belly, and watching the greatest sporting event of all time. This years NCAAs will be in the brand new Minnesota Vikings stadium and expects over 40,000 fans. For our upcoming competitions, Nov 2nd we’ll be at the Michigan State open and they told us they expect full line ups from Ohio state, Michigan, Pitt, Oklahoma, and more. The following weekend were at Tennessee Chattanooga to wrestle them and Army. It’s a quick turnaround wrestling Missouri Thursday in St Louis. We think we have a group of thirsty kids ready to put on a show.
​We hope this text finds you happy, healthy, and at least within a weight class or five of the one you wrestled. It’s been a while since you’ve been on the Illini mats, once hitting beautiful single legs or at times taking some lazy strides back to the center after going out of bounds, but either way we need you back. We’re looking to build upon the program’s rich tradition, the achievements of YOU guys, and elevate Illinois Wrestling to be a National Championship contending team year in and year out. We’re committed to this and not stopping until then.  We will be continually updating you on training, competitions, and any special events going on within the program throughout the season. At the same time, we need the help and support of all Illinois wrestling alumni in several capacities.

The Illinois Regional Training Center (IRTC) is the Central Illinois training hub for wrestlers seeking World and Olympic dreams. They train in our room at Huff and currently supports Illinois alums Isaiah Martinez and Zane Richards, along with Nick Dardanes and Travis Rice who also train in Champaign. Ellis Coleman and Max Nowry are also part of the IRTC, but are training remotely. Last June Isaiah Martinez did what only one other American athlete has been able to do in over five years- beat Jordan Burroughs in a Freestyle match. This was the biggest win of his career and gave him a huge confidence boost going into the Olympic Trials next April. By donating to the IRTC, you will be directly supporting the Illinois Wrestling program.  As a separate entity from the University, we must raise funds to keep these elite wrestlers in Champaign to train with our guys, ultimately making everyone better. We will also use donations to provide workout gear and equipment to the team above what is provided to us by the University.

On Saturday, October 26th, the IRTC will be hosting their 2nd Fundraiser at the Poeta Training Center in Lake Forest, IL.  Similar to last year it will have a star-studded line-up featuring Isaiah Martinez, Kamal Bey, Emery Parker, Jack Dechow, High School all-star matches, all you can eat and drink, and this year we will be adding a casino to the festivities. Tickets are available now for $150 each, or reserve a table of 8 for a discounted rate of only $1000, a savings of $200!


And now for a fun story about how the Illini Wrestling team is making an impact throughout the community. Josh Whittman, the Illini Athletic Director, started a Champaign community run the mornings of home football games. He invites members of the community to join him on his 4-mile run throughout town and campus, at a pace that emulates what you’d think of a typical heavyweight, which makes everyone in town feel welcomed and not scared of the run. He’s joked on Twitter comparing it to something straight out of the movie Forrest Gump. The wrestling team showed up to the first 7am community run of the season, surprising Josh and yes, doing a little PR for ourselves, but nonetheless something that he truly appreciated. We were the first team in the whole athletic department to do it.

We want to thank you for reading this and hope you enjoy the updates throughout the season.  We hope to see all of you on October 26th!
Purchase tickets here
Casino event sponsorship and Donations 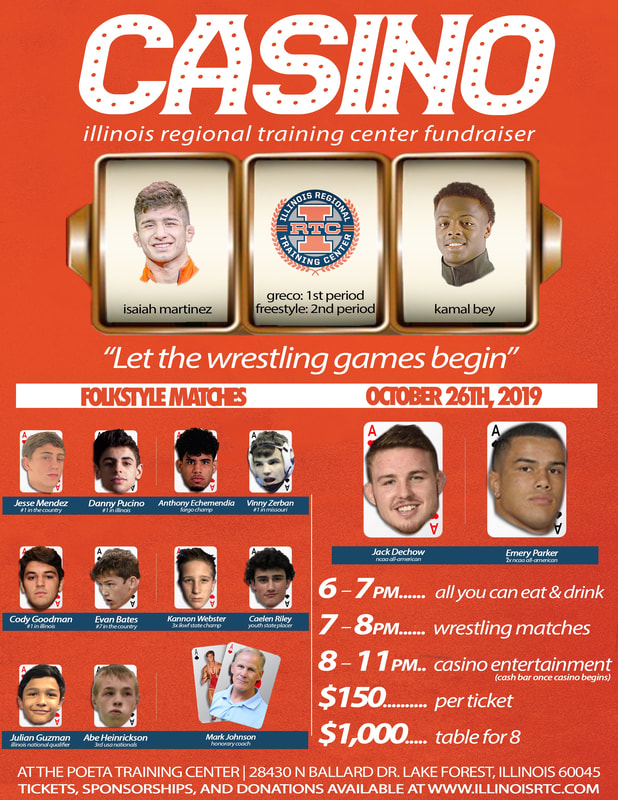 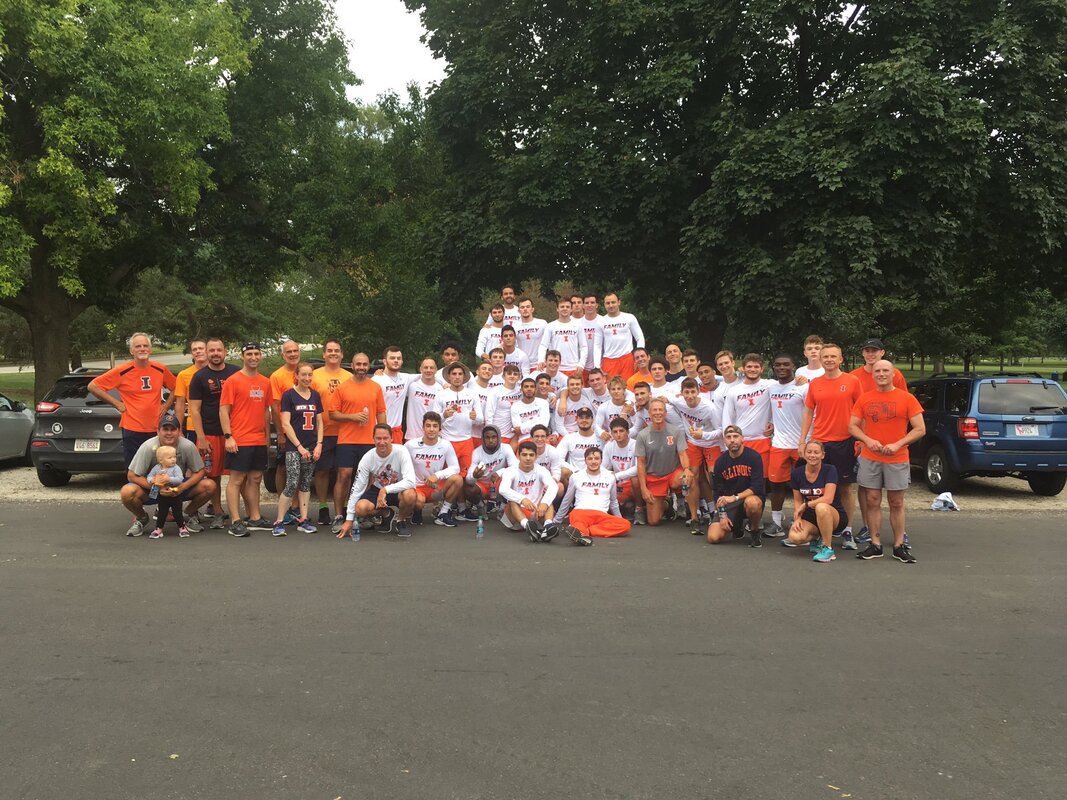